– How exciting is the US/Russia spy swap that’s going on in Vienna? I am refusing to read about it, because I like to believe its much like when kids swap Panini stickers and top US and Russian military are standing around saying ‘I’ll give you one master of espionage for one precision sniper’. I’d also like to think that anyone else could take part. It’d be great if Britain just jump in and say ‘I’ll give you one James Bond and two Spooks for all 10 Russian agents.’ That would be a good swap because we all know that James Bond and the Spooks lot would last for more than one adventure, whereas the Russians would probably be dead or injured in the first ten minutes. Not because they are rubbish, its just that that’s what I’ve learnt from films and films are the truth.

– Despite my meeting this morning being about nothing at all to do with pigeon fancying, the conversation somehow strayed that way and onto Mike Tyson and his love for the flying rats. I had no idea that pigeon fancying was as big as it is. If anything, I had always assumed it was weird for a whole load of different reasons that I didn’t want to question and always feared walking through Trafalgar Square as a pigeon fancier appeared, stripped naked and tried to have a go on a few. Luckily, its not like that at all.

– I had preview number nine last night and it feels like its really getting there now. My big mistake was racing through the show at 110 words per minute, so that needs to be slowed down. I still did 51 minutes though, so if I slow down, my show may go on for days. I stayed to watch Pappy’s preview which was excellent. Particularly a song about technology and a sketch with a far too long costume change for a brilliantly quick gag. Do go see.

– Today my eyes keep sweating. Well the bits around my eyes. I spent a few minutes wondering if I was crying and hadn’t noticed, but no, it was eye sweat. I’m not sure why this happens. My eyes didn’t feel particularly hot. Maybe I need to perfect a cold stare to stop it from happening again. 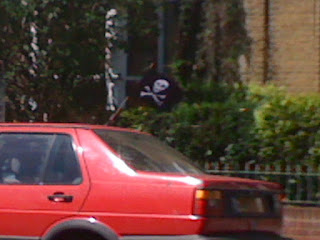 – This car is on the road next to mine. I love the fact that it has a pirate flag and really really hope the owner is very confused about the World Cup and thinks Somalia are playing. I also wonder how many miles the car does to the galleon. Tee hee. I hope he or she are a real pirate who’ve moved on with technology. Go future pirates! 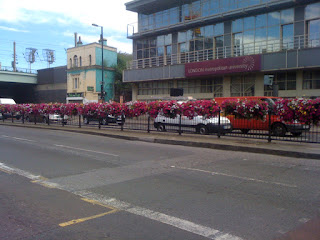 – This is Holloway Road’s new attempt to decorate the area. I can’t help but feel it looks more like there’s been a truly horrific road accident.

– Last night I got a cab home. Despite all usual expectations, and the fact he conformed at first to all usual cabbie stereotypes – cockney, in his late 40’s – my cabbie was immensely cultured and we talked about comedy, art, taxes and the knowledge exam. I was drunk and not sure how I fared (that was an unintentional pun), but it was truly nice to have such good banter when I wasn’t expecting it. I did probably say far too many times how The Knowledge sounds like you become all knowing and like a deity or secret powerful society. He laughed once or twice but then just got annoyed. Either that or he was worried I’d rumbled him.

– What I’m most concerned with about the Raoul Moat story is the police’s inability to find him. Despite all the incredible technology that we now have, the last few years we have lost Osama Bin Laden, Maddie and now a big burly man in a bright orange tshirt with a mohican. If anything, he should be bloody easy to find. I wonder if they’re all hanging out together as part of a hilarious joke. Along with Elvis, 2Pac and Shergar.

– Tomorrow I’m at the Cambridge Comedy Festival. If you live that way, then please come along. It shall be much fun and I will slow down my words, promise. All details at: http://www.cambridgecomedyfestival.com/

Previous Will Work For Lunch
Next Blame Pollen