The problem with where I live, ie London, is there’s a lot of things to do on any one day. You don’t have to do them all, don’t worry, and in fact from it, I tend to do none of them most of the time. The place is littered with excellent art galleries, museums, exhibits, monuments, shows and all sorts of other things and generally I tend to make the best of all of this by occasionally thinking I should go to something and then ultimately not bothering. I used to buy Time Out just to read through all the things I wasn’t doing. Luckily now I can just see it all online for free and use that £2.50 on something other than traveling to those interesting places. Its a shame really, but I think when you live somewhere you take it all pretty much for granted. I’m fairly certain the Tower of London isn’t going anywhere anytime soon, so I could just rock up and high five the Beefeaters whenever I like. But then I also have that terrible fear that something will go wrong, and one morning I’ll wake up to find all the ravens pissed off, the giant that lives underneath the Tower has woken up, destroyed it and suddenly I’ll feel a tad gutted I hadn’t been before all that. I’ll also be hugely scared of being eaten by a giant, but after that initial fear, I’d definitely feel sad about the Tower. In amongst all these places to go, there are a couple I like to go to more frequently than most. By that, I mean once every 5 years or so. Out of these, one of my favourites is the Natural History Museum, where I took my friend Emma too yesterday.

The Natural History Museum is amazing. Its got everything in it that I have been excited about since I was about 8. Dinosaurs, sabre-toothed tigers, a huge blue whale and lots of other things. They are skeletons or models of course. Its not like the weirdest most exciting zoo on earth. Sometimes I wish it was, but then I remember Jurassic Park and I feel mostly pleased that they are very much deaded. The reason for yesterday’s visit was because Emma, being a London newbie had never been and therefore I felt I had a duty to ensure spent some time looking at the skeletons of long dead creatures. So it was either take her to a badly run zoo or the Natural History Museum and the latter, I thought, would be less distressing. I also wanted to see a new exhibition called The Deep. This is a whole new bit all about the very depths of the ocean and what has been discovered down there over the last few hundred years. I have an odd view about such things. I’m hugely intrigued about it all, but at the same time, if I ever found myself 11,000 km below the surface of the sea, I’d probably wet myself. Which wouldn’t matter too much, as I’d be in the sea. Well, in a submarine in the sea. The other mariners may get sad. It turns out there are some truly scary things down there. Lots of giant stuff: giant crabs, giant squid, giant prawns, giant sea fleas. Unfortunately none of those creatures are things I like the smaller versions of so it just made the sea even more scary. If it was filled with giant biscuits or bottles of beer, the whole place would seem much more appealing. Saying that, sea biscuits aren’t great. They just taste like horses.

The exhibition was pretty amazing and there is far too much to blog all about so here, chums, are the best bits of The Deep and the museum in general:

– We’ve only explored the tiniest bit of the world’s oceans so far. Apparently we know more about the moon than the deepest bits of the sea. This, I feel, is proof that the kracken, Nessie and the Abyss all definitely definitely exist.

– Sea cucumbers are very wrong. And don’t work in salads the same way as their land siblings do.

– Elephants spend far too much time on the phone. The funny thing is too, they just talk at you and don’t listen back at all. Which is odd as I thought they’d be all ears.

– Edward Forbes conducted an experiment from 1841-42 where he lowered a net into the sea at various depths and hauled up whatever he could find. At 500ft they hauled the net back up and got nothing. He therefore concluded nothing lived below that. I love that laziness that they used to have in them days. Nowadays he’d be asked to do that experiment hundreds or thousands of times and go deeper regardless. Back then, because no one else could challenge it, he could just say, ‘oh well, did it once, and I’ve decided that’s it’ and everyone has to go, ‘oh ok’. There was another explorer who decided that as he couldn’t measure the depth of the sea using a cannonball and rope lowering technique, that it was clearly bottomless. I have decided that I too will start to dismiss things in the same way and make up my own beliefs. As I am not tall enough to reach the top shelf in our kitchen, I’ve decided it doesn’t exist. It may mean I’ll never use an egg cup again, but as far as I’m concerned that’s the price you need to pay.

– After seeing a skeleton of a horse in the ancient mammals section, Emma and I have decided horses used to only exist in the past and are no longer around. I would like it if you could all start to spread this rumour too and eventually jockeys will get paranoid they are riding around on nothing.

– This is a giant crab. No one wants that. 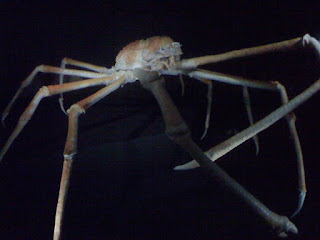 – There is a small bit all about who would win between a sperm whale and a giant squid. They don’t provide an actual answer, nor do they show any footage of a fight. I was very disappointed by this. I would like a whole section in the museum dedicated to such matters, perhaps with an arena in the middle and a daily show where they let it actually happen. Thanks.

– These are the happiest exhibits in the museum: 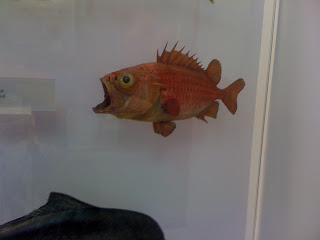 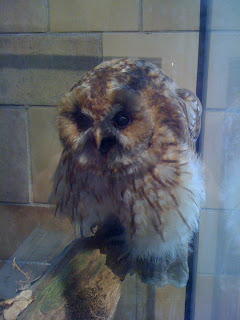 I like to think the fish is shouting ‘Awwwwooooooogaaaaaa’ and the owl is merely saying in a California dude accent ‘Yeah, oh yeah’.

– In The Cocoon, which is a not very exciting bit all about the preservation of plants and spiders and things, there is a section at the end where you can type in what you hope the next important discovery in nature will be. Some people had put interesting things about the curbing of global warming etc. One school boy had put ‘Chris is nob lolz jocking’. I feel they had missed the point.

– According to Emma, skeletons of dogs look like dinosaurs. I pointed out this is possibly because the dinosaurs we looked at were also skeletons and in terms of them both being collections of bones, she is probably right. In terms of everything else, no.

– There is a weighing scale you can get on to find out which mammals are heavier than you. I did not get on it. I was scared it would only say ‘blue whale’ or worse, nothing.

– There is a type of deer that is the tiniest deer ever. This is much better than a giant crab. Animals, if you can’t stick to your appropriate size, then please just get smaller.

– Lantern fish are actually really really tiny. This is probably best for electrical consumption. I might get 20-30 of them and use them next Christmas as tree lights.

So pretty good day all in all. There’s a lot more there, but I I think you should probably just go by yourself and look at it. Then you, like me, will probably never swim in the sea again.