Sometimes I think its hard not to class a day as an entire success. Yesterday for example involved buying a t-shirt with a robot on it, and making this horse out of items from my bedroom: 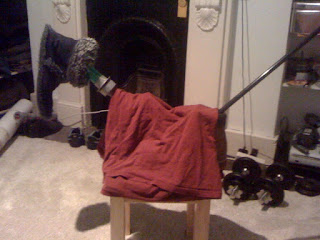 I think its impossible to not look at that and think, ‘there is the work of a proactive man.’ Or you could think ‘there is the work of someone who suffers from severe ADHD’ which is also possible. Here’s the thing, I really probably shouldn’t be left by myself for any length of time, or things like that happen. The day before, when I arrived at the venue for London Comedy Improv early, and no one was around, I decided I would try and do some of the breakdancing moves I could do over 8 years ago, and subsequently banged my head and pulled a muscle in my shoulder and leg. Once you have the ethos that any empty wooden floor should have some moves bust on it, then its pretty difficult not to obey. Of course, had anyone been there, I would have had conversation or at least enough embarrassment not to try. Saying that, I can still six step like no one’s business. By that I mean that most businesses don’t six step at all and that’s why when I do it, it does not resemble any model of a functioning business structure in any way. No, it resembles a man flailing around his limbs like he’s being attacked by an invisible octopus.

I have always had this problem when left by myself. At the age of 5 my mum returned home one day to find I had stuck an entire pack of her sanitary towels to the wall. When she enquired what on earth I was doing, I merely replied ‘collage’. Bet Neil Buchanan has never done that either. So I shouldn’t have been surprised when yesterday turned out how it did. I was pleased with getting a tshirt with a robot on it. It wasn’t a real robot mind you as I’d have bee heavily weighed down by its metal and it would probably shoot people with its laser eyes while I walked everywhere. I really wish it was a real robot. But its not. I then picked up my fringe programme, went home, eat some chips and that’s when things went wrong. It’d be wrong that I wasn’t coaxed into making a DINOSAUR (you have to say it in capitals as that’s how they used to say it before they became extinct) by my friend’s Emma’s goading that DINOSAURS are shit, but she didn’t know the extent to which I would have to try and deal with my own challenge. It is a dangerous thing to challenge me with such silliness as I will try and win it, purely on a competitive and creatively challenged level, much to the detriment of my own time and safety. And so, 15 minutes and some foil meddling later: 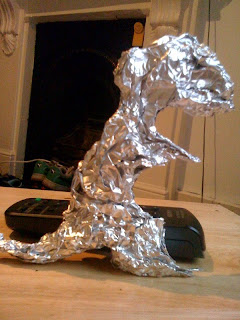 Yes, its crap, but its also avant garde. Maybe. But either way, it was only onwards and upwards from there, making a horse (that was meant to be a DINOSAUR) from a table, a tshirt (not a robot one), two shoes, a lightsaber, a slipper and a stick type thing. I still don’t really know what the stick type thing is, or why it was in my room. I await the say someone says ‘hey do you have one of them stick type things? I really need one right now,’ and I totally will have one. Its like the dude who was a friend of a friend or some tenuous link like that, that I heard always carried a lightbulb on him incase anyone needed one. My problem with that is that how did he know it would be the right lightbulb and how often would he sit on it, pierce his own arse and thoroughly regret his attempts to enlighten people?

So yeah, horse next, which I was hugely pleased with. I would totally ride that horse into town. I would totally race it in events and stuff. Then I was stopped only by my own ambition to make something 12 times bigger than the horse without having the necessary tools to do so. It didn’t stop me thinking about the elephant made from a bungalow, gardening equipment, canvas and a dead elephant all night long though. I wouldn’t really use a dead elephant. Well not all of it. So is it a good thing or a bad thing that I end up doing stuff like this? Well, other people might get bored and kill people, or eat their own arms, or talk to other people about football, and in comparison making a horse isn’t bad at all. What scares me, is the longer I have time by myself, the more weird this creations may become. I fear having a week alone and being found crushed under a 50ft sculpture of a bear I’ve made with barbed wire, otters, bricks and several brooms. Still at least it would be better than anything Neil Buchanan does.

I’m off to have an interview while watching the World Cup Opening Ceremony. Don’t think I’ve ever watched an opening ceremony before but I sincerely hope it involves lots of people trying to open difficult things, like very tight jars lids and safes. Then tomorrow I’m off to Rock Ness to get cold and rained on, then jump around to Leftfield like a proper twat. Anyone who is up there, feel free to come and tell me if I am not being twattish enough. Tomorrow’s blog as a result of rainy twattishness and much fun, will be pre-written later today. Psyche. Or something.