I don’t want to boast or anything, but I think I’m pretty good at drinking. Last night for example, I did a lot of it and I even mixed drinks, which is what you’re not meant to do, but I can cos I’m great. Me and my friend Rosie even drank sambuca which is made from the devil’s piss or something. Probably. Oh god, who am I kidding? Just typing sambuca made me feel sick. And again. Must not type sambuca anymore. Oh no. This is the thing, I’m great at the drinking bit, but I’m not so good at the hangover bit. I don’t know people that are good at both, but you should be able to do it. I mean pilots are often great at flying and landing aren’t they? Some probably even drink while doing that. Therefore I can surely get to a level where I can do the drinking, wake up the next day totally rocking a hangover in a good way. I’m not sure what a good hangover would entail, but I’d like to involve not feeling sick, my brain not feeling like it hates me and is trying to leave my skull, and not having an odd cut on my finger. Rather minimal drunk injury thankfully, but irritatingly painful. Not sure why, as I can’t put my finger on it. Boom! Ha! Sigh.

Here’s the problem I discovered: I really like booze. I have probably drunk more than I should have done these past few weeks, but initially I had done it because I was miserable. Somehow though this has transcended rather seamlessly into realising that actually, I just rather like it. Which is probably a bit dangerous. Especially as I’m pretty good at it. Thing is, I’ve got a fair few music festivals coming up, which you have to drink at because its the law. Then there’s the Edinburgh festival where if you don’t drink you get kicked out. I think. And then people seem to be having birthdays or parties all of the time so they have to be celebrated. Sure I don’t know all these people, but if I get to know all of my facebook friends I could probably cover all the year with birthdays. Sure some of them may be shit and I’ll have to hang around with people I don’t like, but booze booze booze booze booze. Hmm. Maybe I like drinking too much. Right today will just be tea and water. With booze in it. ARGH!

A fly has just landed in my cup of tea. I don’t know if I can express how upset I am by such happenings in mere type. Please now imagine a pathos filled cry that would make animals cower and many feel intense sorrow for miles. What’s it doing in my tea? Nothing. Its dead. There is no joke here. It has merely ruined my one hope of getting through today. I shall now burrow under my covers again and hide until it all goes away.

Last night was immense fun and so, to be fair, deserved further drinking. Superb Edinburgh previews from Sarah Millican and Gary Delaney and a lovely guest spot from Alan Carr which was ace. You are probably already going to see Sarah and Gary’s Edinburgh shows, but if you’re not then rectify that asap. Tonight is the London Comedy Improv show with me in it for this evening. It shall be much fun, if my head stops pounding. Of course I could just do hair of the dog and stop it pounding with more booze. Oh dear. Here we go again….

Oh and I did a new comic what I wrote with my friend Mat Wandless. We are aiming for it to be a webcomic, but it needs a title. Any suggestions? 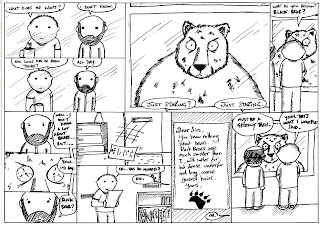 Previous Be More Of An AssHoll
Next Post Fox