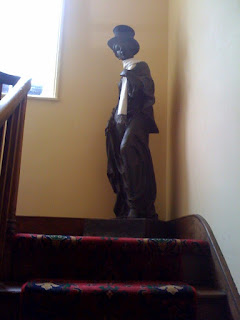 Terrifying huh? Yes, I’m sure a big part of it is having watched the Weeping Angels episodes of Doctor Who, but regardless having this block of stoney fear right outside where you sleep is nothing less than creepy. The house we are staying in is amazing. Is massive and every room has been recently renovated and designed, and on first appearance everything seems excellent. Then you see the statue. One of the gig promoters who lives in the house admitted that every time they are racing around the house and get near it, it makes them jump. Well then why, oh why, would you have it? I woke up several times expecting it to be looming over me staring. Each of those times I contemplated getting out of bed and kicking it down the stairs while telling it to die. Look at its horrible starey face: 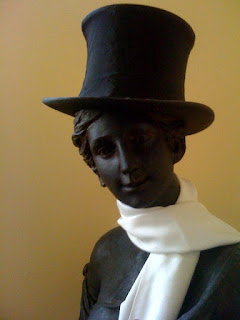 Don’t look into its eyes!!! AAAAAAAAAAAAAAAAARRRRRGGGGHHHHH! And then, then I had an epiphany. This statue, while horrifying in most aspects, has also been made to wear a top hat and scarf which I feel demeans it a bit. Then I calmed myself by thinking of all those scary Weeping Angel statues who are made to hold large amounts of hats or constantly get covered in bird shit in Trafalgar Square. Sure they’re all scary when they’re in space but as soon as some hangs an arrow sign over their heads or gives them a jester’s hat they are probably confined to standing there feeling like a twat. Its this sort of thinking that will both allow me to deal with statue of terror and also will get me killed if I blink.

Phew. Now, what I wanted to write about was a very very odd and unexpected incident at the gig in Tenbury Wells that we did last night. I’ve regularly compered this gig a few times now and it’s always been a really fun lovely gig. Last night they started much of the same though they were a tad more rowdy and heckly than normal. Several of them came up to me in the interval and asked me how I liked that they were ‘giving some back’ and I realised that over all the gigs we’ve had there, they’ve started to become confident. The first ever gig, they were quite quiet, then they’ve increasingly got happier with challenging me onstage. I am both very proud, like a doting gig father, and yet at the same time, slightly afraid that I’ve created a monster. I shall stamp on this next time I am here, although I think that they’ve worked out I’m not at all scary. I may have to increasingly let them get worse and then cancel all further gigs, leaving mad heckly people to run riot in Tenbury shouting insults like ‘farmer’ at each other.

So it was all ok at first. Some odd banter about public toilets that fell into the river and Josh Widdicombe was greeted with, and dealt with perfectly, a strange comment about him having the same beer as me. Stephen Carlin went on second and was great, and then, during the last act, Matt Kirshen, something I’ve never seen at a gig happened. Matt was doing his excellent political stuff and commented on the BNP. He did a joke about Nick Griffin’s DNA needing some other ethnicities in it, as that would help his saggy jowls, and a man shouted back at him ‘no he doesn’t. You need to sort your face out.’ There was a weird pause in the room, and Matt questioned this man, discovering that he was, and fully admitted to being, a BNP member. At which point the racist bigot started unnecessarily insulting Matt, proving, if nothing else, that he was a racist bigot. Matt dealt with it superbly, standing up to him at all times, but was clearly shaken by how uncomfortable everything had got. I was hiding backstage both shocked and partly glad it didn’t happen while I was up there as I wouldn’t have known how to deal with it at all. Then, something awesome happened. The other people of Tenbury started heckling the man, calling him a variety of names. The twat said ‘All the BNP members give me a cheer’ and there was silence. Instead Matt quipped that he ‘was now in the minority, which was ironic’ and two people who were with the man, walked out. Kirshen continued his set, occasionally referring back to it without bringing it back up again, and the crowd were mightily impressed.

Afterwards many of the audience came up and apologised to the acts saying that Tenbury isn’t at all like that and not all the local people are racist bigots, and we all very much believed them. In fact, it was very reassuring to know that they were all as shocked by this man’s presence at the gig as we were. Here’s the thing. I guess I’ve heard about the BNP on telly, radio and in the papers, but I’ve never actually seen one in real life. I was starting to hope and believe nobody could really exist if they were that narrow minded and thick. Sadly, they do. Although, much like everytime Griffin speaks, the BNP member at the gig only served to make himself look like an even bigger dick and therefore booted an own goal in terms of popularity gaining. Why oh why would you come to a comedy gig if that’s your mind set? Ok, maybe certain types of comedy gig. The old school working men’s comedians, but it was fairly clear from the top of our show, that it wasnt like that. It was going to be a gig where mostly left thinking comics would say things that would probably oppose a right wing fascists viewpoints? Maybe we should start putting posters up at gigs saying ‘no BNP members or fascists’. See how they like being segregated.

Still hopefully there will be ripples through Tenbury today as people have realised that these sort of people have infiltrated their area and maybe they’ll be able to do something about it. Then of course it will be left open to an attack by the Weeping Angels which is nearly as scary. Either way they’ll end up stoney faced. Stoney faced? Geddit? Hah? Hah? Sigh.

By the way, I’d like to point out that the gig at the Regal is bloody lovely, with or without the occasional racist (preferably without ta. Though I can’t imagine he’ll be returning) and if you live in the area then you should pop along to the next one on June 25th which will be ace.