All the snow outside our flat has gone. I feel a little bit like the boy in The Snowman when the snowman melts, only less able to sing and also a lot less emotional. In fact, once again I’ve just given a simile which isn’t true. I don’t feel at all like the kid in the snowman. He had a magical adventure, whereas I just nearly fell over on the ice a few times and felt very cold. It did have the lovely effect of making everything look nice for a bit though. Even the job centre at the end of our road looked slightly more serene than normal. This may be because its been too cold for people to stand outside shouting at each other and because all their dogs slip and skate making them less ‘killer illegal breed’ and more ‘killer illegal that bit in Bambi’. Only main difference is that if these beasts were in Bambi they’d probably kill their own mothers making the ending a bit less emotional.

So now there is no snow, and Christmas and my birthday is definitely over, it feels like holiday time has stopped. So to comfort myself in this harsh catapult into the face of reality, I am going to spend today playing the new Xbox games I got for my birthday and deal with everything else tomorrow. Some people might say this is a slackers way to deal with things, but I would argue that in the same way someone couldn’t just stop taking heroin, they’d have to slowly wean themselves off it, I am much the same with relaxation. Today for example, I may sit in an uncomfortable way for a few hours. Tomorrow, I will do two bits of work, then sit uncomfortably for a few hours, then stand around a bit. I will continue this trend until by next week, I am spending the day working uncomfortably while standing around. The being uncomfortable and standing will hinder the work and I will slowly have to wean myself back into a series of comfortable working sitting positions. Sadly, once I am in these comfortable working sitting positions, I don’t want to do much. And so, dear reader (for there is only one of you), you can see the sort of terrible dilemma my life is constantly in.

But of course I jest. That’s my job, jesting, so of course I do it. Otherwise I would be out of work even more than I already am. Today, apart from Xbox playing I am doing a tiny weeny bit of work, and, AND AND, I am going to cook something from my trendy new veggie cookbook that Layla’s mum bought me. Its called ‘The Vegetarian Option’ and has some really rather lovely things in it. I’d already bought it for my parents and my brother, being that we are all veggies, I thought it was one of those clever presents that sorts out present getting in one go. Then I realised I quite liked all the stuff in it as well. The only thing is, as much as I’m excited about making things from it – and no, you cannot mock excitement about cookery, for cookery leads to eatery and eatery is brilliant – there are two problems, both of which I shall highlight in picture form for you now: 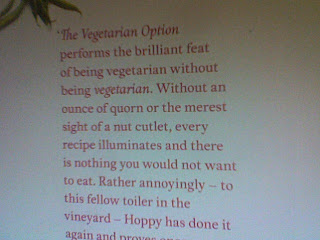 What the hell does that quote mean? How on Earth can you be ‘vegetarian without being vegetarian’? I understand how perhaps someone could be say ‘Jewish without being Jewish’ in that perhaps they eat bacon or eaten of a non-blessed plate, but you at least stay Jewish in heritage or ancestry. Whereas if you are vegetarian but you aren’t being vegetarian then you eat meat which means YOU AREN’T A VEGETARIAN! Is this book aimed at people who aren’t veggies but like eating vegetables? If so then there should be no shame in buying a veggie cookbook. I can’t imagine they are sitting thinking ‘ Oh god, I can’t have all my friends assuming I’m a vegetarian because I bought this book. They’ll stop inviting me to cow biting days and the meatings where we sit, drink meat broth and discuss the best way to marinade pig eyes. I know, I’ll get a cookbook that means I’ll be vegetarian without being vegetarian.’ If you are reading this thinking that you have had exactly that conversation in your head then please let it be known you are a mega cockhouse. 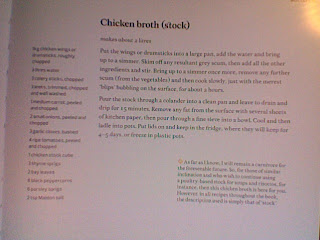 I’ll admit there is little to say about this that shouldn’t already be expected from my previous paragraph. But, if, like in the very hard to read bit at the bottom of the pic, you find it hard to make soup without a chicken stock because you are a ‘carnivore at heart’, BUY ANOTHER FUCKING BOOK FOR MEAT EATERS! Phew, deep breaths, and sudden regret I’ve bought this book for so many people. Sigh.

1) My face is very beardy. This is good as it keeps warmth in my face, and because Layla likes it. This is bad because MY FACE IS REALLY ITCHY! Seriously, I think its why some of today’s blog has been in capitals. There is little other way to cope. STOP THE ITCHING PLEASE STOP IT!

2) I am doing Josie Long’s rather superb night in Camden tomorrow called The Lost Treasures Of The Black Heart. It will be a lovely night apart from my bit as I havent got a clue what to talk about yet and today I am playing Xbox so will have to figure it out tomorrow. But you should come. There will be great acts and nice merchandise and cakes and all sorts. Here’s the linkery:

Previous The Little Dog Barfed
Next Praise of Songs