My stomach and guts are having issues with me. Whilst I am really very happy with the vast amounts of booze and food I consumed yesterday, they are less pleased. Yet, what neither of them know, is that they will be subjected to the same level of destruction again today. Yeah! Take that guts! While some may see the festive season as a celebration or a time to be with family and loved ones, I definitely also see it as a challenge as to how much I can consume before I am defeated by grub. If the adage ‘you are what you eat’ is true then based on yesterday I am a terrible mutated amalgamation of delicious things. I ate six different types of cheese. Six! And that was before and after dinner. There was also trifle, pies, roast potatoes, cake, chocolates, crisps, nuts, crackers, brussell sprouts, shallots, spinach souffle, more chocolates, more crisps, dips, and the odd vegetable but not too many incase I over did it. Typing all that makes me feel proud. It also makes me feel a little sick and very heavy. So far I can still fit into my jeans, but halfway through yesterday the belt had to be taken away. I reckon that by 2-3 o clock today, they will have to be replaced with an expandable waistline or there will be no hope.

Yesterday was a pile of awesome at my parents house. Got some ace presents, with my favourites being a Fred Perry tshirt from Layla. Its just like the one Damon Albarn wears, although I suspect that now he will say he wears a Fred Perry tshirt just like Tiernan Douieb. And amongst other ace things, Layla also got me these: 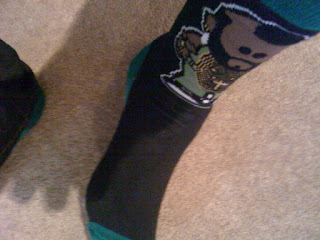 Motions are being made to hurry up as we are driving to Layla’s brother’s house in Leamington Spa today to have Xmas Day 2: The Return. More presents and. sharp outtake of breath at the thought, more food. So before we head off, here are some quick thoughts:

– Watched Harry Potter and the Half Blood Prince yesterday. Layla hasn’t seen any of the films, I’ve only read the books, but somehow since previously saying JK Rowling was a thief who stole all her ideas from Tolkien and many others, my Dad has completely turned his opinion round and become a big fan. The film was good but I cant work out why, with such a large budget, there are still a large amount of child actors in it who could have been replaced by wooden statues and still have conveyed more expression.

– Doctor Who. I didn’t hate it as much as I thought I would. I didn’t necessarily like it though. I also really hope that in the next episode Catherine Tate falls down a manhole. And dies.

– We didn’t play any board games yesterday. Mostly because we were physically incapable of lifting even a Scrabble piece. This is sad as I feel like it is the annual chance to prove who is the clear champion of the Douiebs every year. We shall have to go through 2010 as equals. Not good.

– My parents kept their cat, Rusty, outside all day and me and Layla felt sad for her. After some protesting they let her in. We turned our back for one second and she started eating the nice cheese. She was kicked outside again. No more protesting.

– My brother very kindly got me and Layla a Eurostar voucher. I have told him I will wait some time before using it as I worry the people that were trying to board from Monday might still be waiting.

– I played my Christmas playlist. It got turned off 6 tracks in. Fail.

– The ‘Curiously Cinnamon’ did not taste ‘bonkers’. In fact it definitely did not also taste ‘curiously cinnamon’, nor did it have a ‘new taste’ at all. I may spend time next week writing a long letter of complaint. I feel horribly let down by all its promises of bonkersness.

– On Dec 30th I will have written this blog everyday for a year. Up until then, if any of you blog readers, old or new, have any favourite blogs, or least favourite blogs or bits of blogs that have been left unanswered and you want answers or a follow up for, then please let me know. I intend to finish a year of blogs with a tie-up of all of these things. If none of you comment, it will be a hugely dull one.

Time to man up and deal with the culinary onslaught once again.