Today’s blog is split up into mini-blogs. This is because today’s blog arrives later than most and my brain has had time to wake up. Usually I write this blog as the first thing I do in the day. Admittedly that’s not until about 1pm, but still by that point in the morning (its still morning then because I said so) I’m a bit sleepy so can only cope with one or on good days two things to blog about and think of words for. I’ve already done work type stuff today so I’ve been thinking loads of things. It doesn’t mean this blog will be any better than usual. Far from it. It will probably be a diluted ball of the same amount of words just loosely dangled over many things. To make life more exciting for you the topics will not be in chronological order, and will range between some longer ones and some shorter ones. Strap in blogees, for the multi-blog!

The film trailer for Alvin the Chipmunks 2 states ‘There have been sequels, there have been prequels but there has never been a…SQUEAKQUEL!’ Do you know why there has never been a squeakquel voice over man? Because it is the shittest most horrible word anyone has ever made. Its got two Q’s in it fr fuck’s sake! You can’t even write it in scrabble. Not only that but the film is a sequel. Its part 2. That means your squeakquel is still a sequel. You haven’t thought it through at all. It looks like a heap of chipmunk toss too, summed up by the man in the cinema sitting behind me merely saying ‘that looks wrong on so many different levels’. I’m not sure what levels they are but I assume one is a squeakevel. Idiots. This film was only saved by the St Trinians 2 trailer that appeared after it which temporarily burned my eyes with its radioactive levels of mediocrity. NO ONE LIKED THE FIRST FILM! THAT DOES NOT MEAN YOU GET ANOTHER GO!

IF YOU CAN’T BEAT THEM, JOIN THEM

The man at the till in HMV yesterday had a sad expression. There was a large tent in the courtyard of the Islington N1 centre blasting out endless Christmas music. As with all shopping areas and large public displays around this time of year, it didn’t play any interesting Christmas tracks, like anything from James Brown’s Funky Christmas, the Leisure Society’s ‘Last of the Melting Snow’, or anything from Surfjan Stevens Xmas album. No, instead it played Slade, Wizard and Mariah Carey to the point where shoppers were getting angry and more irritated, staff were getting more angry and irritated and even the DJ looked as though he felt like couldn’t inflict this sort of pain on the planet for much longer.

Luckily I have the ability to move and so was only subject to aural rape for so long, whereas HMV man was unable to escape his little corner only a few meters from the jingle playing tent of Christmas gloom. He started packing my purchases and I decided that I would reach out and speak to him, hopefully bring some joy to his day. ‘Simply having a wonderful Christmas time’ rang out and I asked him how many times he had heard it that day. He replied with ‘Too many’. I offered commiserations. He chuckled and then, he suddenly burst into song and sang along with it. He gave me the bag with my DVDs in and said with a big grin ‘Well if you can’t beat them join them!’ I smiled back and as I walked out though that maybe he was right. He has shown strength in the face of adversity. Perhaps Christmas music has been sent to test our willpower. It would explain why year after year every track has that special something that takes it from being just a music track to instead a specific type of mental torture. Maybe some Christmas tracks started out ok and quite nice and executives knew that would not be enough to cause its listeners to be disgruntled and five years olds to think its great, and so they added the sound of bells ringing until all its test subjects felt the need to barge into each other and complain about the time of year. Then as I reached the tent where the DJ was I thought no. The HMV man was wrong. We should just beat them. With big pointed sticks.

I’m going to the last of Richard Herring’s As It Occurs To Me shows tonight. Hooray and yey.

Or as Terry Saunders wonderfully put it on Twitter (@terrysaunders) ‘Some cunt won some thing’. I hated it. I hated all of it vocally and most importantly, online. Layla asked me, as for the umpteenth time I stared at the screen and shouted ‘fuck off’ as the losers from last year appeared dressed in women’s clothes and told people to put their hands up if they liked moronic music, why on earth I was watching it then. I also saw someone on Facebook say the worst thing about Twitter was that people they liked watched programs they hate. Well to both Layla and that person, its partly because we only have one telly and Layla wanted to watch it. I was sat at the laptop across the room but its nicer sitting next to my girlfriend on the sofa. The real reason though is that it provides comedy fuel. I hate so many aspects of the manufactured pop karaoke nightmare that is X-Factor, but I bet you Twitter is a damn sight less funny next weekend with the lack of animosity that X-Factor brought to it. Sad to see you go X-Factor. I do hope lots of repulsive idiots with no personality and an uninteresting standard way of singing all audition next year to keep me hating.

MY JOKE ON A T-SHIRT! 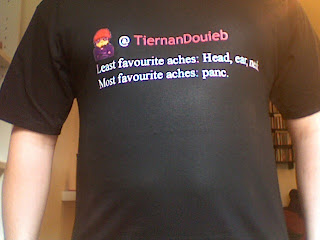 I won this as part of the #tweeshirt competition from Clothes2order.com on Twitter the week before last (@clothes2order). I am very pleased with it although can’t help but feel wearing my own joke on a tshirt might make me appear more than a tad vain. On the other hand I’m considering wearing it at gigs and just pointing to it when I want a break. Maybe I should get jokes printed on all my clothes and do a dance like those women did to that Daft Punk song? I’ve struck comedy gold here people. Comedy bloody gold.

Layla has bought some more tiny baubles for our Christmas tree. DOES SHE NOT REALISED THESE ARE EVEN EASIER FOR THE CATS TO REMOVE AND DESTROY? Today I have found two baubles in one of my socks, one bauble in my bath and one in the bath. WHEN WILL THE MADNESS END?

They are proper dicks. Firstly the mass child abuse scandal in Ireland, and now it said in today’s papers that they stopped the production of the next two Dark Materials films because they ‘promoted atheism’. Yes the latter pales in comparison to the former, but it still just adds a notch onto its most fundamentalist believers being a pile of dicks. I suggest that next time any film with a strong Catholic film, say the next Narnia tale, is in production, all atheists should protest about its strong Catholic theme. Perhaps complain that if children see it it will unfairly make them believe in nonsense and they may be swayed to spend hours of their life hugely naive.

WHERE THE WILD THINGS ARE

I saw this yesterday. I liked it lots, but cant say I loved it. It could be partly because they have got a full film from a 10 page book which means large parts of it felt like filler. Or it could be because I just couldn’t work out what the film’s message was at the end of it. This could be because I’m an idiot. I did however love the soundtrack. Well done Karen O. I also loved Max’s monster suit and I have decided I want one.

I did some filming for Wordia.com today. I won’t tell you all the words as I will be posting links around to them all over the place when they go online. However, one of the words I wrote a joke about yesterday. Feel free to use this as your Christmas joke for this year:

Q: How do you make a christingle?
A: Tickle his nads.