Posted by Tiernan Douieb, 13 years ago on Thursday, November 5th, 2009 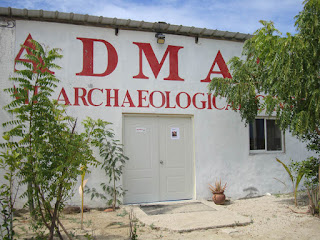 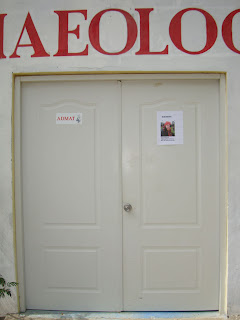 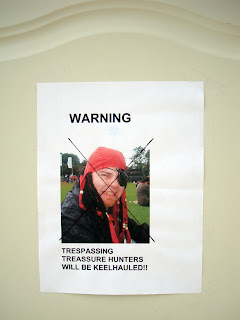 These pictures were very kindly sent to me by Christine (aka @divingdane) who is a proper treasure hunter in the Dominican Republic. She has a real job title but basically it involves diving into sunken ships and finding long lost artifacts that may have belonged to the Mayans or the Lost Arc of the Covenant and other things the Nazis also want. Again, that may be a slightly fabricated version of the truth, but I’ve decided she’s like an Indiana Jones/ Lara Croft of 2009. Recently she asked if I had any good pirate pics. Me, being ever proud of my pirate like face, sent over my very bestest one with out asking why. It appears that I have now become the face of treasure protection in the area for the Underwater Cultural Heritage. Real pirates and thieves would never dare cross that snarl. Unless they had guns or knives and a perception of when images are only 2D. Ignoring that though, I feel pretty bloody proud. All I’m hoping for now is that someone in Haiti asks for my zombie picture to keep away and supernatural marauders. Please send any requests my way. Eventually I hope to send out life size cardboard cut outs that people can put in their supermarkets and stores to stop crooks pinching things. Unfortunately if they were lifesize people would not be able to see them over the shelves and they would be rendered pointless.

Its Fireworks night tonight and frankly I couldn’t give two steaming tons of monkey cack. Not that I have two steaming tons of monkey cack to give. I don’t want you all thinking I’m some kind of monkey cack hoarder. Firstly I think the whole reason for the day is ridiculous. While I agree that parliament should’ve been blown up on several occasions, the idea was that by celebrating fireworks night we were commending his failure. Instead, many years later, he’s a martyr and we now party by showing simulations of what he was meant to do. This is a rather odd example of punishment and I can’t imagine the same would have happened 400 years from now if Osama Bin Laden had failed to fly planes into the Twin Towers. Would people really be cheering for Ground Zero Day and throw tiny burning planes at paper mache towers to show what could’ve happened? No I doubt they would. Essentially what we are doing is fighting fire with fire. Except without the fighting. Surely a better and more accurate celebration would be to get lots of gunpowder ready and then just as its about to go off, put it all out with a hose? Saying that, there is something delightfully mocking about letting children hold sparklers whilst Fawkes failed to do anything. I suppose in that sense its a bit of ‘in your bearded face Fawkes’.

Secondly, fireworks are shit. When I was younger it was all a bit exciting that things exploded and there were colours and stuff in the sky and pilots got scared, but now its a case of ‘seen one, seen em all’. The fireworks creators need to jazz them up a bit. I want fireworks like in Lord of the Rings, that turn into dragons and stuff. Or show messages in the sky saying things to loved ones such as ‘I didn’t mean to sleep with your sister Tracey’ and ‘ I forgot to feed the cats, sorry’. Sadly its all the same every year, some bangs and lights, whilst somebody plays the 2001 Space Oddessy theme music and if you’re lucky you get burnt by a bit of ash. One year as a kid, we had ‘indoor fireworks’. These are things I haven’t seen on sale for many years, probably due to the incredible lack of health and safety. They were tiny stationary fireworks that when my Dad lit the fuses, they would sparkle a bit then fill the room with toxic fumes until we had to open all the windows and doors and not choke to death. I imagine the inventor of such things is now locked up somewhere for the deaths of many families.

I’m avoiding all firework things tonight. Knowing my area, people will be setting them off for the next two months anyway without any concept of the term ‘night’ in ‘fireworks night’. Instead I’m going to watch We Are Klang’s DVD recording at the Bloomsbury which I’m very excited about. I’ll be keeping my cats indoors too. Not because they’ll be scared of the fireworks but because they are grounded after yesterday and not allowed any kind of fun till they buy me new headphones.