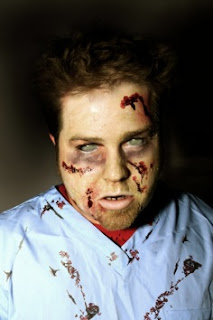 Halloween is a really odd celebration isn’t it? I mean, while it started out as a pagan celebration signifying the ‘lighter side of the year’ becoming the ‘darker side of the year’, its somehow evolved into lots of people prancing around pretending to be monsters/creatures/sluts. I’m never sure how the last one gets in there alongside the other two. I’ve never watched a zombie film and suddenly thought, ‘you know what, this would be far more terrifying if there were scantily clad women in this.’ In fact, they are the opposite of scary in most men would be fairly pleased to meet one in a dark alley. Saying that, I’ve seen some dressed up scantily clad orange beasts in certain parts of the country who would terrify me at any distance. It also worries me that we enjoy dressing up as evil things. I’m damn scared of a zombapocalpyse and in no way want to make them feel welcome by dressing up as them and giving messages that it’d be ok for them all to drink punch, dance and then eat our brains. I feel its sending mixed messages. The original idea that the souls of the dead merge with out world on All Hallow’s Eve is not something we should be having fun with. Have you seen Buffy the Vampire Slayer? Or Torchwood? They spend forever trying to avoid this kind of thing happening and yet tonight loads of people will be just encouraging it. Tut tut tut.

Its amazing how people spend shedloads of money buying cheap plastic costumes and lots of pumpkins for a single day. You may argue that all celebrations are for only one day but Christmas has several days off after it which makes it more valid, and also the presents you get tend to last for a bit longer than 24 hours. Whereas if you’re caught dressed as a werewolf in mid-November its likely people will think you’re pretty weird. I think Halloween should at least be a whole week of stupid fancy dress. I’d like to whole office blocks of zombies and vampires, while the tube is filled with witches and goblins. I’ve often thought of really stepping it up and organising a week of zombie-a-grams for people whereby on a daily basis people dressed as zombies would bang against their windows and doors until they are sure the world has come to an end. Then, just as they are about to kill themselves and their family to save them from being eaten alive, everyone does jazz hands and sings ‘Happy Birthday’. I reckon it could be big. Tonight I’m going to be applauding people I see today in costume. Particularly the ones dressed as non-obvious things. I’m hoping there’ll be a few Nick Griffin’s around, as he really is evil. Also 20 points to any kid dressed up as a hoodie. 10 of those points are for the lack of effort. The other 10 would be because I’ll actually be scared if they ring on our door.

Still debating whether to do tonight’s gig in costume. Last night the crowd were so lack lustre I almost wished they had all been possesed by demons and burst into flames. Anything to make them more fun than the sack of apathy they were. So not sure if I should give them the benefit of the doubt today and make some effort. I have a feeling tonight will either be lots of people who want to escape trick or treaters and so have come out, or people who really want to have fun on Halloween. If its the former I’ll just do a gig. If its the latter I’ll wait till the interval then run out of the dressing room and start biting people. I reckon they’d love it.

Last note of today before I go and start the usual Halloween ritual of pretending there’s no one in our flat and ignoring any children. I saw a trailer for The Descent Part 2 before Zombieland on Thursday. The first film really scared me and I thought it was one of the best horror films I’d seen in ages. It had that wonderful British bleakness where there was no light hearted element to any part of it. No hope of happiness. I’m very worried about the sequel. This is entirely because of the quote used in the trailer. Bare in mind that popped up on screen and I was quite happy to read it. It was when this was read out by the usual trailer voice man that it made the whole cinema laugh out loud and suddenly the film seems no longer anywhere near as scary. The quote was: ‘THE FEEL SHIT SCARED FILM OF THE DECADE’ – Metal Hammer Magazine. Yes, it appears to be one to miss.

Previous Friday Thoughts
Next What a Seamus