By Tiernan Douieb In Lambeth Life, on August 1st, 2018

Elf Lyons was shortlisted for the top award at the Edinburgh Fringe Festival last summer. Now she is on the brink of a return, with a show that explains money, inflation and hardship in a way you have never heard before, writes Tiernan Douieb. 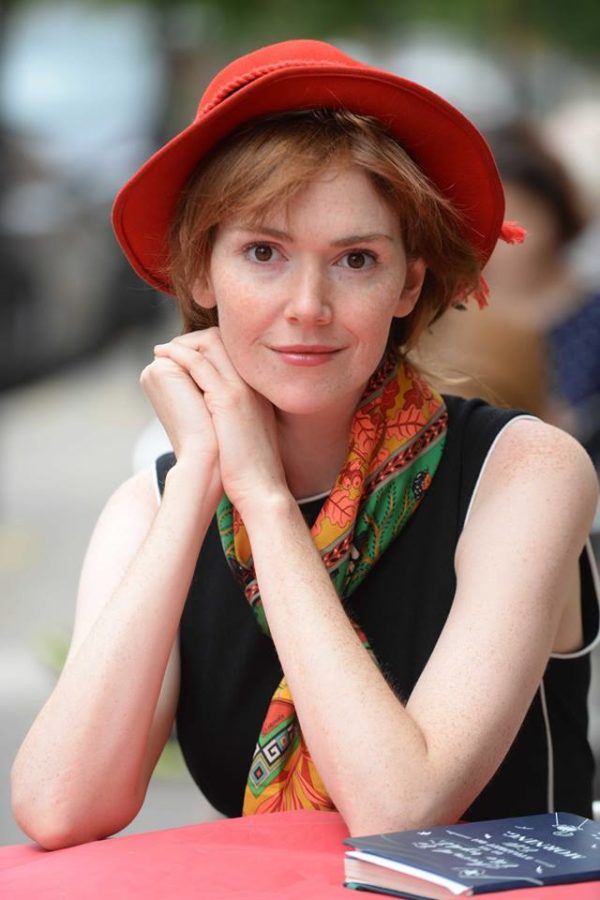 Lambeth’s Elf Lyons is one of those comedians whose performances can definitely be described as hysterically funny – but move beyond that and it’s hard to know how to categorise her.

Her show at last year’s Edinburgh Fringe, entitled Swan, was a mixture of clowning, stand-up, drag, cabaret and over-the-top French accents as she attempted to recreate Swan Lake, live onstage each night while dressed as a giant parrot. Oh, and sometimes as a shark.

It’s a natural product of her training at the Ecole Philip Gaulier clowning school in Paris. Elf is billed as the ‘Queen of Clown’ and last year’s show deservedly earned her a nomination for the main Edinburgh Comedy Award, putting her on a par with household names such as Adam Hills, Dave Gorman and Reginald D Hunter.

She returns to the Edinburgh Fringe this year with her show Chiff Chaff, a one-woman musical about the economy.

When I met Elf on an extremely sunny Saturday afternoon she explained why she had chosen this topic – and how putting it together had been informed by her life in Oval over the past five years.

“Lambeth is the best. I shop local, I know all of my neighbours, I go to the same café every day, Di Lieto, I’ve got pen pals in the area, old people that I meet and swap details with,” she said.

“For me it’s a community-based area but I don’t know anyone in my block of flats, not for want of trying but they’re all 9-5, young, woke, millennial workers who all leave early in the morning and come back at night.”

She is “really proud” to have joined the local branch of the Women’s Equality Party.

Her choice of political allegiance was clear to her.

“When people talk about feminism, they often mean white feminism, they’re not thinking about everybody in London, from different demographics, in different wage brackets etc, so I think that’s something we do need to fight for”, she says. She’s riled by pigeon-holing, like those who assume she is a Conservative because she went to boarding school.

Elf describes being a woman on stage as “inherently political”, putting her in a rich vein of female artists who have taken on the once all-male comedy establishment. She notes the continued double standards whereby as a woman performer “you’re either able to sexualise your body or you make fun of it, but if you jump between the two, people don’t know what to make of it”.

Comedians, and laughter, could be the driver towards a more engaged society, she muses.

“We have to think outside the box. We’re the Monster Raving Looney Party. Of course, you’d want to have a 99p coin. It doesn’t make any economic sense – but it does make common sense. It’d save so much change”.

“It’s a great way of getting kids involved in politics. You need parties like that. Also, the joy of creating inventive ways to benefit the community, not just economically, but emotionally.”

She wouldn’t call politics her creative inspiration, although in relation to Swan she says, “I think there is something very political and totally punk about refusing to acknowledge what is going on and saying I’m just going to be a complete clown for now”.

The “dismal science” of economics has really fired her new show, however.

This is because her father is Gerard Lyons, a former Standard Chartered bank chief economist who went on to serve as an advisor to Boris Johnson during his time as London mayor.

“For me, when you say, ‘Economics’, I immediately think of my dad, I think of every Sunday lunch, because it’s the one conversation, it’s the subject we always talk about, so it’s a word of absolute powerful love for me.”

I put it to Elf that her show is the comedy version of Talking to My Daughter About The Economy, by rebel economist and former Greek finance minister Yanis Varoufakis – but delivered from the daughter’s perspective.

She agrees and says that one of her next projects is a book she is writing with her father about economics.

“It’s me explaining my ideas about the economy to my dad and us arguing about them and trying to specify it – but in a fun way.”

“I see recessions as forest fires because I’m a woman of visual imagery, being dyslexic, and my dad’s a man of maths. If he quotes statistics to me, I’m not going to remember those, but if you tell me inflation’s a bit like when money turns into spinach and deflation is when it when it turns into really heavy sacks of potatoes that are a little bit mouldy, I understand that a lot more. If you say to me that stagnation is couscous, I immediately know it’s something we shouldn’t look forward to.”

Elf says that over her years of performing, she has overcome an early need to be liked on stage that her mum picked her up on. Her advice to rookie comics: “Do what makes you happy, don’t try and prove anything to anyone”.

She admits to being hooked on the buzz of doing shows, and finds watching Love Island great therapy. (“Stick 10 people in a house together and watch them night and day, you get solid entertainment. I didn’t realise how important it was for me to have that comfort”).

For those who don’t have a chance to see Elf in Edinburgh, or who don’t fancy economics, she has a play in the pipeline for the autumn – a serious horror show in which she plays Medusa in the final hour of her life. Amazing lighting and sound are promised and the director is Ian Nicholson, winner of a Stage Award at Edinburgh for a Don Quixote adaptation with the Little Soldier theatre company.

It’s typical of a young comedian whose range of reference is exceptionally broad, who vows to “play to my strengths” and whose energy and inventiveness will surely lead her to further success.

Chiff Chaff is on at the Edinburgh Fringe in the Pleasance Dome from the 1st to the 27th August (not the 13th) at 18.50. Visit www.theelflyons.com and Tweet at @elf_lyons


Filed Under: Uncategorised
Previous Highlights from 100 episodes of Partly Political Broadcast
Next How to make money from comedy…
Loading Comments...