In the Hot Seat: Tiernan Douieb 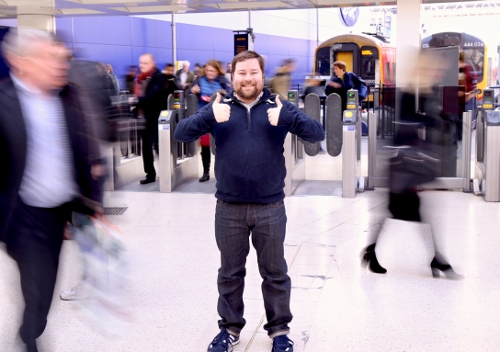 Close your eyes and picture Edinburgh. What do you see?

Beautiful cobbled streets, Arthur’s Seat and the Castle looming over them with sheer presence. And me not being able to really look at any of that because I’m trying to dodge being flyered for a drunk version of a play about alcoholism while not getting hit in the face by horizontal rain. In summer.

What is the last thing that made you snort with laughter?

Actually it was watching Nick Kroll and John Mulaney’s Oh Hello On Broadway on Netflix. There’s some many excellent gags but a couple in particular that made me snort and spill my drink. Before that it was a picture of a tiny Pomeranian dog that looked very cute but had been named ‘Mr Wilson.’ I have very unstable comedy tastes.

Tell us about this year’s show.

Well I usually write topical political material but as this past year or so has been so eventful, I got a tad fed up with re-writing jokes every 5 minutes. So this year’s show is more generally political and looks at why people (including me) get stuck in their opinions and why it’s impossible to make everyone happy. Except the audiences of my shows, obvs. Ahem. I’ve even tried to get angry this year but apparently I’ve still not quite managed it, so instead there’s lots of jokes and one use of the word ‘banana.’

Who do you want to see this year?

I’m most excited about seeing Andy Daly at the Gilded Balloon. His show Review With Forest McNeil made me howl with laughter, as did his appearances on Comedy Bang Bang and his Podcast Pilot Show. Daly has an incredible ability – that I’m super jealous of – where just his facial expressions have you in stitches and he tows the fine line between comedy & tragedy so perfectly. If you get a chance, google ‘Jerry O’Hearn (Andy Daly)’  where he does 5 mins of stand-up that is just comedy tropes and no actual jokes. It’s incredibly funny. I’m on The Alternative Comedy Memorial Society with him at the Monkey Barrel on August the 6th and honestly worried I’ll act like an idiot fan boy.

Do you have any Edinburgh Fringe traditions?

Yes but they are pretty much all food based. They involve visiting Mary’s Milk Bar as often as possible. Having a giant baked potato only once, then regretting it all day as I can’t move due to a food coma. Also eating at Koyama Japanese restaurant which is always excellent. Oh and also the tradition of me saying ‘I won’t do too many extra shows this year apart from my own one’ then getting booked in to do loads of extra shows.

What is your getting ready music?

I haven’t picked it yet as this year I think I’m just going to choose a playlist based on music my tech Sarah likes as she has to hear it 20+ times. Though she has given me her preferences of Prince or Bowie, so I’m very happy with that. I think she only likes dead musicians.

If you could have any guest in your show, who would it be?

What is the best backhanded compliment you have had?

There’s a lot to pick from. Recently I had ‘I don’t really like comedy but that show was great.’ Good. It appeals to people who don’t like comedy. That’s exactly what I wanted. Sigh.

Who made you howl with laughter when you were a child?

The Muppets. All of them really but particularly the running gag in Muppets In Manhattan where they insist Kermit and Fozzie are twins but the only way to tell bears and frogs apart is because bears wear hats. Joyous silliness.

What should Donald Trump know?

I feel like this requires a 10,000 word essay response but aside from just putting ‘Anything. I wish he’d know anything at all apart from his own narcissistic needs’, I think the answer would be that the more he protests about his connections with Russia the more we’re convinced there are some. He’s now said ‘I’ve no connections with Russia’ so many times I’m starting to think he’s constantly in the Kremlin and all the rest of the world sees is a hologram projected to various locations. This would explain his odd skin tone and fear of stairs.

What do you do in Edinburgh that your parents wouldn´t approve of?

Eat at Mary’s Milk Bar as often as possible. My parents are pretty chilled but no one should eat as much ice cream as I attempt to in August.

Catch Tiernan Douieb: Miserably Happy at 2.30pm at the Waverley Bar throughout August. Tiernan is one of our top shows this year