Balancing family and life as a stand up comedian: Q&A with Tiernan Douieb

I’ve always been curious as to how performance artists balance work and family life. I’ve often wondered if its easier or harder than working nine to five. In my latest Dadbloguk Q&A, I speak to stand up comedian, husband and father Tiernan Douieb to find out how he does it. 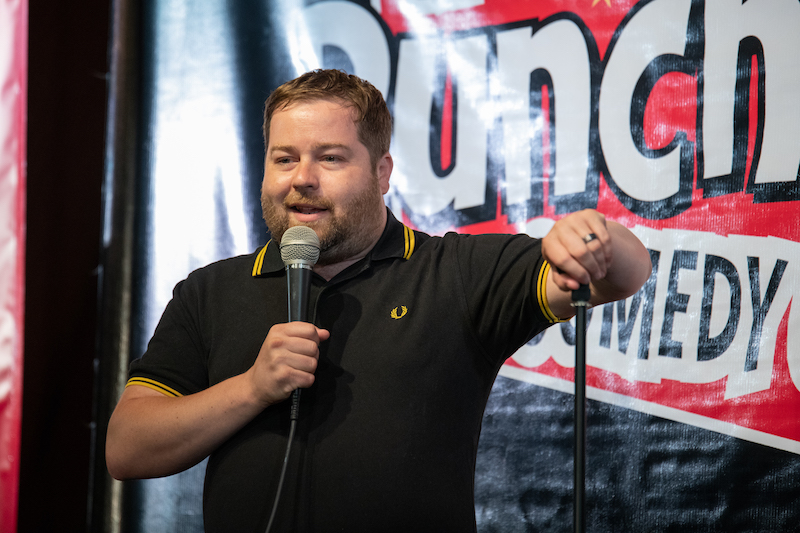 I tried to make that introduction funny, I really did. I came up with many different ideas to make it amusing but, ultimately, this is a Q&A with a comic so I felt I was better standing back and letting Tiernan do the gags.

Tiernan’s presently supporting Frankie Boyle on his tour. He’s a prominent podcaster and performs both adult and family-friendly shows. Most importantly, he’s a husband and dad to one year-old Aurora….who seems a little confused as to who her father is, but I’ll let Tiernan explain all that. Oh, yeah, I should probably also mention that Tiernan is a bit tired.

Tiernan, can you please introduce yourself and your family?

Hello! I’m me, a constantly exhausted dad, stand-up comedian, writer, endless Twitterer and always tired. Did I put that bit already? I’m so tired it’s very hard to tell. My wife L can’t be named as she has an anonymous blog and Twitter (@proresting) due to her being a writer and actor and someone who then writes about injustices in those creative fields. That and she doesn’t want anyone to know she’s associated with me. She is also very tired.

Then there is our daughter Aurora who turned one at the end of March and is very skilled at doing a series of animal impressions, flinging herself off things when you least expect, trying to eat things she shouldn’t, head butt things she definitely shouldn’t, and exhausting her parents. That’s all of us, though we did a have spider on our ceiling for a while that we named Ian, but he seems to have gone.

Your little one is a year old now. How has fatherhood been so far? Any highs and lows you’re happy to share?

I am very much enjoying most of it, with little pockets of really hating bits of it. Aurora makes me so very happy and she causes me to laugh silly amounts pretty much every day. I absolutely marvel at the way that she wakes up some mornings with whole new skills like she’s downloaded them over night. I really do love that I now have a long overdue female reboot. However I’m so tired – did I mention that? – as she still likes to wake up 4 to 5 times a night every single night, and as a comedian, up until a year ago, I’d had more sleep than most people, so I really was not prepared for this.

Trying to dress Aurora is like arm wrestling an octopus. It verges on being the most frustrating and irritating thing I’ve ever had to deal with, but it pales in comparison to having to read her the same book 15 times over, or watching food you’ve just made get flung onto the wall or how many socks she’s lost. None of those things are really that bad, but again, my job very much revolved around me being the centre of attention and having to care for someone who often displays just how little she cares is a very grounding thing to happen. Basically, I’ve realised being a grown up is hard.

You’re a comedian. Tell us a couple of funny dad experiences you’ve had so far….

The first time A called me ‘Daddy’ she was about 8-9 months old, sitting in her high chair flinging macaroni at the wall, and then she suddenly stopped, looked right at me, then pointed and said it. I was so overwhelmed and full of love and happiness that here was my daughter and she called me dad for the first time ever. I couldn’t believe it! But then she pointed at a bit of macaroni and called it “daddy”, then at a plant and said “daddy,” and then at her foot, and then at a bowl. It went on for a while. It’s amazing how quickly your own children can make you feel absolutely worthless.

Another time was the day she first learned to scream and we had to do a food shop, so she spent the entire shop round Tesco’s just screaming at the top of her lungs, while wearing a big proud smile on her face. Everyone looked at us in horror as though we were trying to murder our child, and my wife and I were so embarrassed. We raced through the entire shop and forgot half of the things we needed. It was only when we got back to the car that I realised that’s probably what I’ve actually wanted to do every time I’ve ever gone shopping. She was just vocalised my inner monologue. It’s amazing what you can learn from a baby.

Something I’m always curious about with performers such as yourself: How do you balance the late nights, bizarre working hours and unreliable income with fatherhood? Does a job in the corporate world ever seem more appealing or does your work life mean you can, in fact, be around more?

It can be tricky, especially trying to have energy for a gig that doesn’t finish till 11pm, when you’ve been up since 5.30am. The unreliable income too is far scarier when you realise you have to keep yet another person alive with it! Luckily my income isn’t too unreliable after having been a comedian for 16 years and I’m around a lot in the day times, so I think I probably get to see and look after our little one more than if I did a normal job.

There was a tricky few days when she was about 6 months old and I had two weeks of shows in Hong Kong. My wife wasn’t entirely pleased about that. It’s hard though as turning it down would’ve meant losing a lot of pay, but doing it meant not being around for 12 days. My daughter got her own back though by making my jet lag last at least a week once I got back.

I’d say the hardest thing is finding time to write. Things like my podcast or specific subjects I can write about, but to, say, write a new hour show where I need to work out what it is I’m talking about, requires headspace and usually some calm. So as a result, I haven’t written a new show in over a year. Then again, Aurora does generate quite a lot of material so I guess it all balances out.

How do you balance things with your wife? Has she returned to work?

Yes she went back to work in November. As we’re both self-employed she only got statutory maternity pay which in London means you can afford to look at some food every few weeks, so she had to really. Her hours are pretty flexible too, so we just work out who’s working when and if she is, then I won’t and vice versa. If we both are, then time to call the grandparents for back up!

Dad jokes: Are they ever funny?

Yes definitely! Just not at all to children. Or other adults. Or non-dads. Or dads that aren’t you. They’re just for a very, very niche audience.

In addition to stand-up, you have podcast but what’s next for Tiernan Douieb? Any tours coming up etc?

My podcast is three years old this year and its a political comedy podcast called Partly Political Broadcast. Obviously at the moment its a mix of jokes and getting to hear a man having a weekly breakdown at the news. Otherwise I’ve been supporting Frankie Boyle on all his New World Order warm up shows since beginning of February and I’m continuing to do that till end of May, which is great fun.

I’m also currently touring a family show about politics with Tatton Spiller, the creator of SimplePolitics.co.uk. It’s called ‘How Does This Politics Thing Work Then?’ and we explain UK democracy to children aged 6+. A lot of audience members have asked why we can’t explain it to politicians too. We’ve got several more tour dates around the UK before summer, then more in the Autumn. I’ll also be writing a new adult stand-up show as soon as I’m allowed to sleep. If that happens ever again. Sigh.


Filed Under: Uncategorised
Previous How To Be Confident
Next Being a dad and being self employed is a funny business